We’re excited to be participating in the first ever Portland Mini Maker Faire, at the Oregon Museum of Science and Industry! We will be running workshops on jewelry making out of old electronic components, and will have Captain Chronomek and our Steampunk props out for people to play with. If you are in the Portland Area the September 15th and 16th you  should come out and join us!

Comments Off on PDX Mini Maker Faire at OMSI 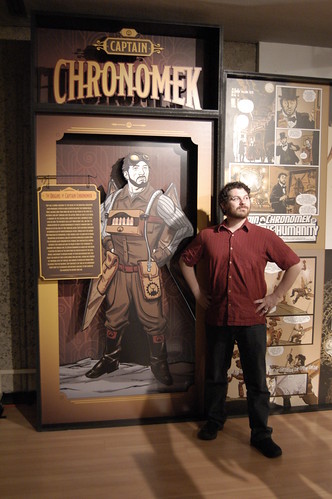 Read all about it here: ASU Emerge Trip

Comments Off on Conference Report: Emerge 2012

Captain Chronomek will be visiting Emerge 2012!

We are excited to announce that Captain Chronomek will be featured in a new exhibition on Design Fictions that is taking place at the “Emerge: Artists + Scientists Redesign the Future” conference at Arizona State University.   Captain Chronomek is one of four featured design fictions alongside such superstars as Boilerplate, Henry Hoke and the Instititute of Backyard Studies, and Adiel Fernandez (aka Adiel Angel).  We will all be part of an exhibition sponsored by Intel entitled “Powered by Fiction: Artists, Makers, Tinkerers and the Backstories that Inspire Them to Create”.

The Emerge conference promises to be a wild ride!  From the website:

These singular questions will be explored on March 1–3, 2012, when Arizona State University hosts Emerge–an unparalleled campus–wide event uniting artists, engineers, bio scientists, social scientists, story–tellers and designers to build, draw, write and rethink the future of the human species and the environments that we share. And then we’ll celebrate. Arizona State University, the nations’s largest university, is determined to break down the barriers between those making the future and those thinking about what it all means.

Comments Off on Captain Chronomek will be visiting Emerge 2012!

Posted on February 18, 2012 | Comments Off on Welcome to Tanenbaum Fabrications!

Welcome to the new site for Tanenbaum Fabrications.

Comments Off on Welcome to Tanenbaum Fabrications!