Captain Chronomek is a steampunk superhero for the DIY generation.  Created by Joshua and Karen Tanenbaum, and Allen Bevans for the TEI 2011 Student Design Competition, Captain Chronomek has won multiple awards including “Best Costume” at the 2011 Vancouver Maker Faire. He was part of the “Powered by Fiction” Exhibit at the 2012 Emerge Conference at ASU.  In 2014 Captain Chronomek joined a number of other exciting projects as a member of Roger Whitson and Dene Grigar’s Critical Making in the Digital Humanities archive. 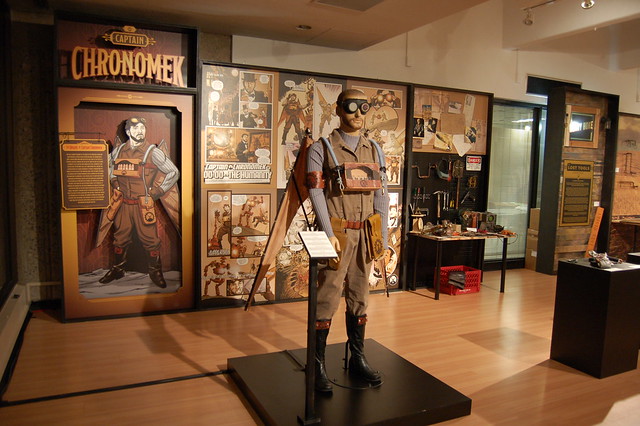 Plucked from the late 19th century, trained in chrono-temporal incursion, and augmented by extra-solar causal-diagnostic nanotechnology, Captain Chronomek protects humanity and her allies from the chrono-revisionist plots of the Static Harmonium, an evil consortia of beings working to impose total dominion and uniformity on our galactic timeline.

With a highly-developed mechanical sense and the wisdom and knowledge of generations granted to him by the nanotech meteorite embedded in his chest, Captain Chronomek constructs the tools of his superheroic trade from the technologies and materials available to him wherever or whenever his assignments take him in order to prevent and repair tempo-historical revisions.

The video slideshow that played in the background of our presentation at TEI 2011.

A video of the TEI2011 Superhero Fashion Show from TEI2011 on Vimeo.  Includes all of the other superheroes from the conference as well.